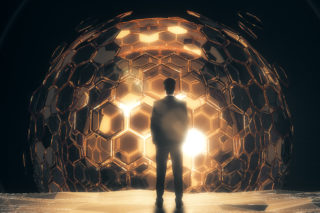 Once I had to hire somebody for a lab I worked for.

I was co-interviewing with my boss, and we were having trouble filling the position.

One of the applicants looked really good on paper but he came across rather stiff.

He even described himself as a “lone-wolf” kind of guy.

And since working in the lab required talking to a lot of different departments and being proactive, we decided to give this guy a pass.

Sometimes it’s cool to be a “lone wolf.”

I’ve done a lot of backpacking, and generally it’s better to have fewer people than more.

The more people you have, the longer it takes to make a decision.

But with only a couple of guys, you tend to spend less time talking and more time walking.

Whenever you have an objective that doesn’t necessarily involve a lot of people, like fixing your sink or cleaning out your garage, being a lone wolf is generally best.

Get in there, get it done, and then get out.

If you had six of your buddies over while you tried to fix your sink, it’d NEVER get done.

Some people are terrible about playing the “lone wolf.”

Whenever they decide something important, they need to talk to as many people as possible and get all kinds of different opinions.

Clearly, it’s limiting to be either a lone wolf all the time, or a social butterfly all the time.

It’s very effective to be able to shift into either mindset depending on the task at hand.

But some people are much better shifting into one than the other.

If you can only do one, you’re limiting yourself.

But if you can do both, you can be pretty marketable.

You can tell any interviewer, for example, that you can get along with all sorts of people and work well within groups, but you also know when to turn on the tunnel vision and get things done.

Not only can you switch sides when needed, but that will come across in your energy.

You can radiate both intense focus as well as socially powerful energy.

Making you stand out from everybody no matter where you go.